Case study – a 4kW solar system with a 5kW inverter in Peregian Springs. 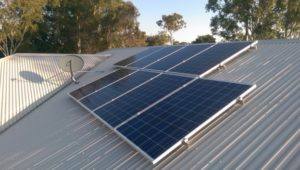 Today I am going to discuss the benefits of installing a 4.24kW solar system using 16 CSun 265Watt Solar panels and a 5kW Zeversolar inverter.

This system has been installed on a single story house with a tin roof in Peregian Springs on the  Sunshine Coast. The total installed cost for the solar system is $4,900. This includes installation, GST and has the solar STC incentive deducted.

The output of a solar system depends on the orientation and tilt of the solar panels. This solar system has 8 solar panels installed on a North facing roof while the other 8 are faced towards the West. The tilt is on a standard roof with a tilt of 22.5 degrees. Under these conditions the solar system will produce the following output over the year:

Month with most output: January 21.8  kWh per day

Month with minimum output: May 13   kWh per day

This system is connected to a 5kW solar inverter, which means that up to 6.36kW (24) solar panels can be connected to the inverter and still be eligible for the full solar STC incentive and a buyback feed in tariff of up to 10c/kWh for any excess electricity generated.

In the future, as battery prices become more economical, this system can be upgraded to store the excess energy generated, for use in the evening reducing electricity costs even further.

And, depending on the type of battery smart inverter the household chooses to upgrade to, the electricity generated and stored can be used during blackouts, which means that important appliances such as the refrigerator, computers, and modems can still operate.

As electricity prices increase, the benefits increase too, essentially they have insulated themselves against future price rises by generating their own electricity.

The table below shows a range of possible benefits under different self-consumption scenarios.

The 4kW solar system is a great way to reduce electricity bills at a reasonable cost while still allowing for future expansion when battery storage becomes more viable. Consumers can still maximise the solar STC incentives and buyback feed in tariffs and, as electricity prices rise, the benefits to the household increase.

Once the system has been paid off from the savings made, the household will continue to benefit from free electricity for years to come.